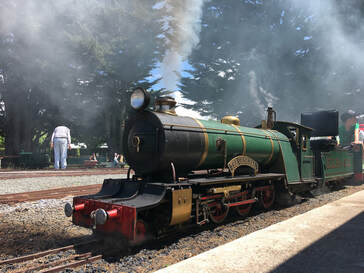 A live steam locomotive with a rich worldwide travel history.  Built in 1947 in Farnborough, England and arrived in Tasmania in 1977.  The Pacific type (4-6-2) locomotive then thrilled passengers at Salamanca Market in Hobart, Farm-o-rama and Penny Royal in Launceston.  The locomotive fell into disuse, was dismantled and parts were lost.  In 1992, Greg Waddle lovingly restored the loco to who we now know as "The General". The new steel boiler was made by Ditchams, Hobart and operates at 100psi. 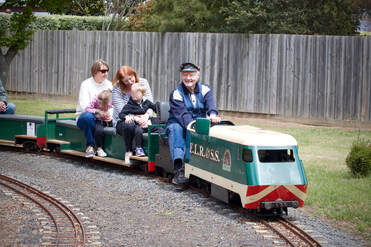 Little Jim is a petrol hydraulic locomotive modelled off an XPT (Express Passenger Train). Originally built by Dale Kingston of Smithton, restored by Greg Waddle in 1995 and 2021 a new motor installed with electric start. 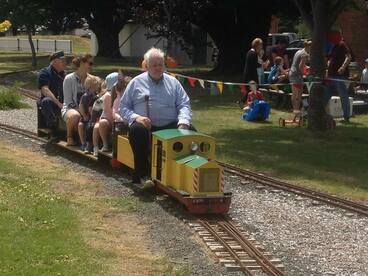 Born in 1876, Nicola Romeo was an Italian engineer and entrepreneur. In 1927, the company was commissioned to build a locomotive My Lyall Mine in Tasmania.  The Loco arrived in 1929 and in it's life had a number of engine swaps and changes.  The train usually consisted of 18 or 21 seat carriages on the Lake Margaret Hydro electric scheme line that connected Queenstown with the isolated settlement of Lake Margaret. The tramway was the only way in or out of Lake Margaret and provided a passenger and freight service until 1964 when it was replaced by a road. The one of a kind loco is now at Tullah. 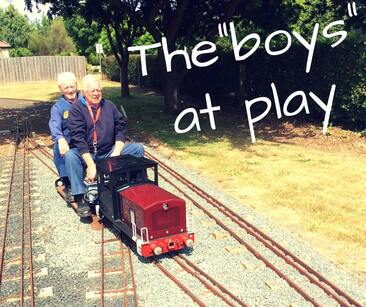 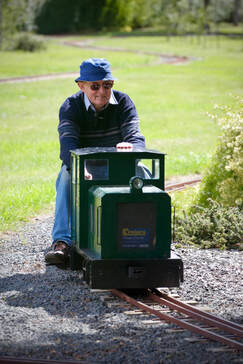 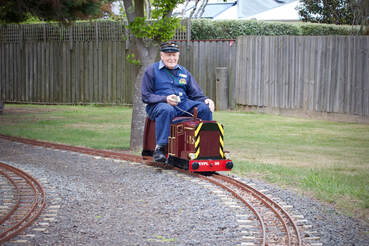 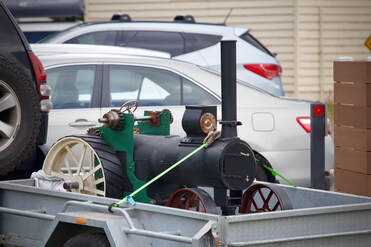 Durham and North Yorkshire Agricultural Co traction engine (1875) built to 1/3 scale, approximately half built. This is a popular design drawn by John Haining in the late 1970’s. No full size examples exist today as they were scrapped to provide steel for the war effort. This one is to be as close to the original as possible although using modern engineering practice and materials. 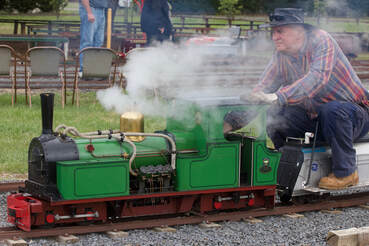 A miniature of a 4 cylinder Heisler built by Avonside Locomotive Company. 2 were built to work in sugar can plantations in South Africa. 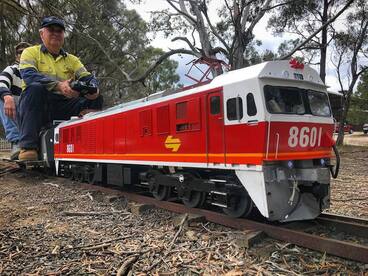 This 5" gauge class 86 is modelled from the prototype which ran across the New South Wales electrified section between Sydney and Lithgow in the Blue Mountains. The route had steep gradients and usually resulted in multiple class 86 locomotives at the head end of freight trains.

My loco was built in NSW and is constructed throughout in steel. It is powered by 4 x 12Volt sealed lead acid batteries. The batteries power 2 electric 150 Watt motors. Control of the loco is via a radio controlled handset. 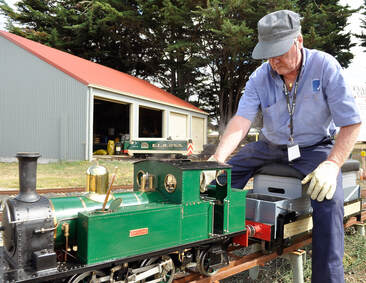 This loco is called Gaylene after my late wife.  It is an 0-4-2 tank loco which I bought from Julian Ridges but needed some work on the valve motion.  Currently in pieces being refurbished. 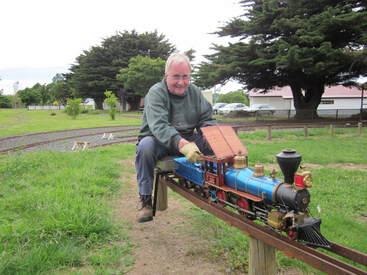 My Virginia on its inaugural run on our Clubs elevated track.  It is based on an early American design 4-4-0 and it took an elapsed time of nearly 8 years to build while I was still working at our retail nursery.

This shot of a partly built loco is a scale model of a Victorian Railways J Class heavy freight loco and is based on J 549 which runs at Malden in the goldfields of Victoria.  I actually drove the prototype.  The boiler is finished but not shown and I have been working on it for about 5 years. 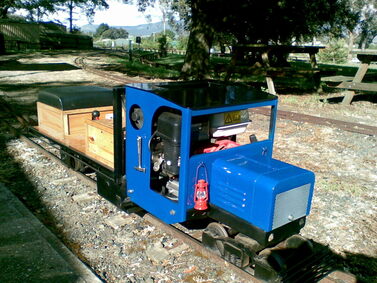 Petrol Rail Motor with the cab design modelled off a "Red Fred" QLD Rail motor.  4Hp drives a flywheel with a right angle adjustable rubber wheel which drives chain and sprocket to the rear driving axle. 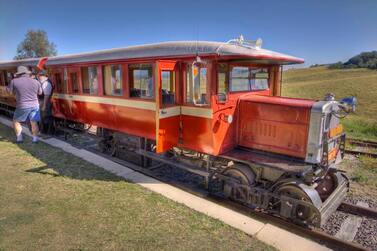 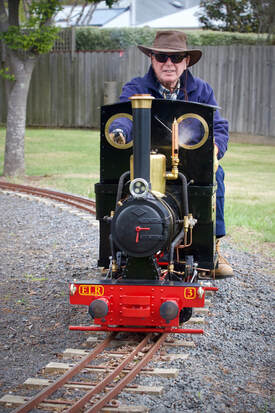 The Heidi class locomotive was designed by Keith Watson of Western Australia and was modelled on a Freudenstein locotmotive called Golden Ridge that operated at thje Golden Ridge Mine near Kalgoorlie W.A.  The Loco is a 0-4-0 well tank, 20 inch gauge and weighs 3.5 tons. 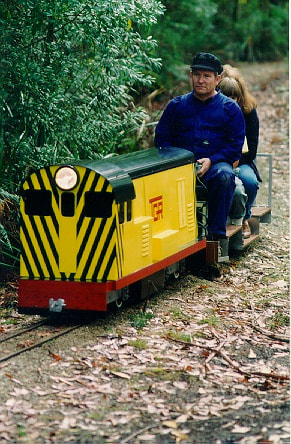 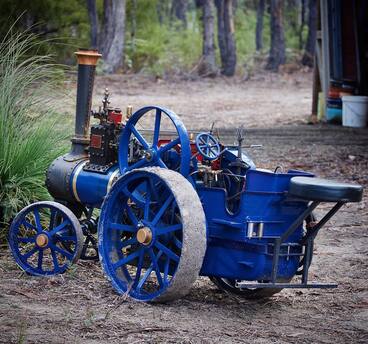 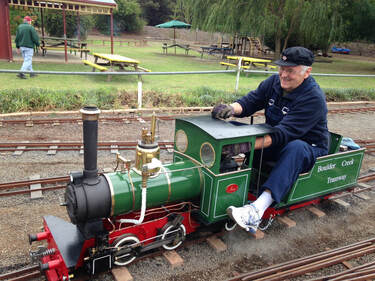 My Heidi steam loco “IVOR” which I bought in from Queensland about 4 years ago.  It required a fair bit of rebuild and work to restore and bring it to how it is today. 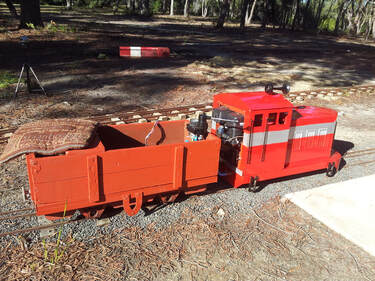 I also have my original petrol/electric loco “NB30” [modelled on  Pichi Richi railways shunter] it was scratch built about 40 years ago, when I had my own track at a property in New Norfolk. 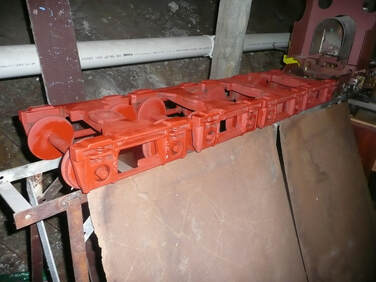 Along with the loco I still have two 4 wheel wagons and two double bogie flat wagons.
Powered by